You are here: Home / Archives for flu

Note: I am neither a dietitian nor a doctor.  I do not dispense medical advice nor do I offer any information on treatments nor cures for any medical condition. Always consult a physician before proceeding with any treatment.  Our full disclaimer is at the bottom of this page.

In June and July on the blog, we’re going to discuss gut health.  Gut health is a hot topic in the traditional foods world because so many people are not healing despite a traditional foods diet.  I became seriously ill and healed my gut before the currently fashionable diets came out.  This is my story.

A very wise man in my life often tells me, “A problem well stated is half solved.”  Five years ago, we knew all of the problems, but had none of the answers.

I was born 7 weeks early to an undernourished mother who was 95 pounds when I was conceived.  My childhood was rather uneventful health wise, other than huge tonsils and repeat ear infections.  I grew normally and had none of the digestive problems associated with celiac disease.

I was diagnosed with PCOS in 2001 and was told I’d never had kids.   I changed my diet to traditional foods after seeing my cat, Blue, have an ‘incurable’ and life-shortening health problem healed by a species-appropriate diet. I was told he wouldn’t live long and would require expensive, difficult medication until his death.

It had worked for him why can’t it work for me?

END_OF_DOCUMENT_TOKEN_TO_BE_REPLACED 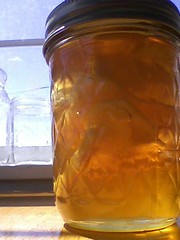 Recently, we’ve had the yearly sinus fun that comes from the wild weather swings of Spring.  We had short sleeve weather, two days of freezing, then we hit 90 degrees the next day.  This was compounded by us doing some heavy gardening and cleaning out the chicken coop, exposing us to a lot of dust.  The weather and the dust caused my husband and son to have post-nasal drip and a nagging cough from the resulting tickle in the throat.

I am always on a quest to find cheap and natural ways to help treat ‘what ails ya.’  A few weeks ago I read about making a cough syrup by very thinly slicing a hand-sized piece of peeled ginger, END_OF_DOCUMENT_TOKEN_TO_BE_REPLACED

Early last week, I came down with a head cold.  When I became ill, we assumed it was the flu as I had been exposed to someone with the flu a few days before, so I treated it the wrong way.  By the time we realized it was just a cold, it was too late to get my normal measures to work as most natural remedies work best if you use them at the onset of an illness.   The miserable portion of the cold was over fairly quickly, but the cough hung on.  And on.  And on.  Now, ten days later, I’m finally up the upswing but I’m still coughing and my stomach muscles are shot.  I’m not prone to lung problems, so this really caught me off guard.

Generally speaking, I do not wish to suppress a wet, productive cough because getting the mucus out of your body is the quickest way to heal.  So I focus on ways to break up and remove the mucus, and only stop the coughing at night so I can rest.  For dry, non-productive coughs or coughs caused by a tickle in the throat, coating the throat can bring relief.

The first way to deal with a productive cough is to lay over a balance ball or on a slant board, head down.  That allows gravity to drain the mucus out of your lungs and get it out quicker.  If you are dealing with someone elderly, infirm or a child, you might want to consider very gentle percussive therapy, which achieves the same results.  The more you drain your lungs, the less likely you are to develop bronchitis and the quicker you will heal.  Spending 15 minutes in this position would greatly cut down on the coughing for a few hours.  I do this three or four times a day and always before bed, as it would allow me to fall asleep easier.

The second help has been slippery elm lozenges.  I simply mix slippery elm bark powder with a little raw honey. Add more powder until the honey can’t hold any more, then roll it into lozenge-size balls and store them in the fridge.  The slippery elm coats your throat and stops the tickles.  If you use honey infused with an herb like ginger, so much the better.  I use these when someone calls or I otherwise want to try to prevent coughs for a few minutes while I’m interacting with other people.

Finally, when I must sleep at night, Ivy leaf extract has been wonderful to stop the cough.  Bronchial Soothe syrup for the kids and pills for me will stop the coughing for 4 hours.  The only downside to this is that it only lasts four hours.  So you will wake up coughing in the night and have to take another dose, or get up and dose the kids.  However, this is the only natural cough syrup that I have tried that has consistently worked, and worked well for both me and the kids.  You can grow your own ground ivy and make tinctures or syrups, if you desire.

Disclaimer: If you order the Bronchial Soothe or other products from Iherb.com using the link above, I will receive a small percentage of your purchase in store credit. This post is in no way endorsed by Iherb.com.

How do you deal with winter coughs?